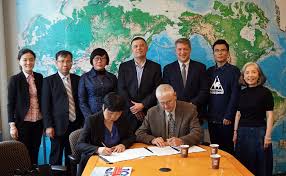 The Joint Core Group has dual directors – one at UBC and one at ECNU – responsible for implementing its activities. The current co-directors are Professor Timothy Cheek (UBC) and Professor XU Jiin (ECNU).

ECNU is a high level normal university founded in October 1951, based on the former Great China University and Kwang Hua University, incorporated with part of Fudan University and Tongji University. ECNU was one of the first 16 universities officially graded as National Key Universities in 1959. This status was reaffirmed in 1978. ECNU was also one of the first 33 higher education institutions authorized, by the State Council in 1986, to establish their graduate schools. In 1996, ECNU passed the prerequisites appraisal and became one of universities sponsored by the major national program “Project 211”. In 2006, the Ministry of Education and Shanghai Municipality signed into a partnership for co-sponsoring the development of the university, qualifying ECNU as a member of the “Project 985” and facilitating ECNU’s efforts and progress towards a world renowned high level research university.

East China Normal University attaches great importance to the internationalization in its development and enjoys a wide influence and reputation in the world. The University has established strategic cooperative partnership with many major universities, such as ENS Group in France, the University of Pennsylvania and New York University, Tokyo University and Kobe University in Japan, and the University of Melbourne in Australia.

The IAR is one of several units at UBC (including the Department of Asian Studies and Faculty of Education) that has ongoing exchange activities with ECNU.

The Joint Core Group organizes collaborative faculty research, graduate training, and joint conferences and workshops based at UBC and ECNU but also including other cooperating institutions, such as the Institute of East Asian Studies at the University of California, Berkeley, and the Australian Centre on China in the World at the Australian National University.

Since 2002, The University of British Columbia (UBC), Canada and East China Normal University (ECNU), Shanghai, China have established a fruitful decade-long academic cooperation in the fields of Chinese thought and social research, including faculty exchanges, joint conferences and workshops and shared graduate training.

UBC and ECNU cosponsored a major international conference (held in Shanghai) in December 2002, UBC sent faculty to a follow‐on conference with ECNU (held in Hong Kong in 2003), hosted a visiting faculty at UBC from ECNU (Professor XU Jilin) for a semester in 2004, and since 2005 we have had extended exchange of PhD students for a year’s study (that is, one ECNU to UBC as visiting fellow, and one or more UBC PhD candidates at ECNU in Shanghai for a year—in each case students attended seminars and participated in the graduate training life; on average, one student each way, each year). Both Tim Cheek and Tim Brook have been hosted as visiting faculty at ECNU in recent years.

Oct. 2012 – Agreement for the Joint Core Group signed by the two presidents in Vancouver.